Glen Mervis noticed something interesting while on his snow clearing route this Winter: The grass on the sides of the road wasn’t damaged.

Most Winters that grass is decimated by snow clearing operations. But this year there was something different. Mervis had been pre-treating the roads with brine.

“A lot less salt is used with the brine versus the rock salt—up to a 50 per cent reduction,” says Mervis. “That’s one of the primary focuses here—the environment and the reduction of sodium in the environment.” 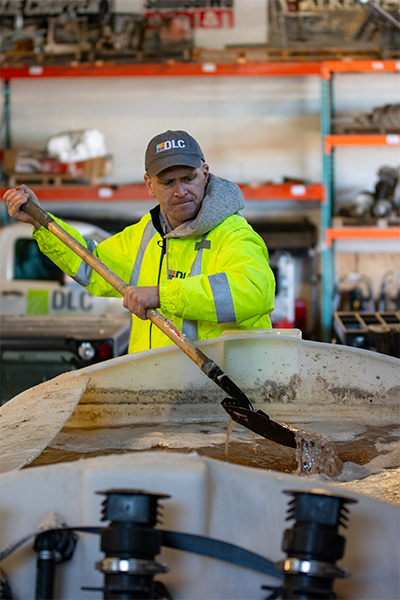 Glen Mervis, an ice-prevention operator at DLC, is helping salt dissolve in water with a shovel. Photo by Laurence Brisson Dubreuil.

Mervis works six months a year as a fertilizer technician, and during the cold months he works as an ice-prevention operator for DLC Greenteam’s snow removal program.

This past August, DLC started implementing a completely new de-icing method: brine. The brine used for snow removal is essentially salt diluted into water with an added component similar to molasses.

Mervis explains the step-by-step process of brine making at the DLC head office in Kirkland. Video by Laurence Brisson Dubreuil.

On the island of Montreal, a few other independent snow removal contractors are using alternatives to salt for deicing.

For example, S3 Déneigement in Outremont uses beet juice as a pre-treatment to help the salt adhere better to the ground, reducing the amount used. But currently, all snow removal contractors with the City of Montreal are exclusively using traditional road salt to deal with ice.

“The City currently uses salt and stone, because they offer the best performance considering meteorological events, cost, efficiency, implementation and storage,” according to city spokesperson Audrey Gauthier. “The City has tested several alternative products in the past, such as beet juice and blue salt, for its spreading operations, but these were not sufficiently cost-effective to justify a change in practice.” 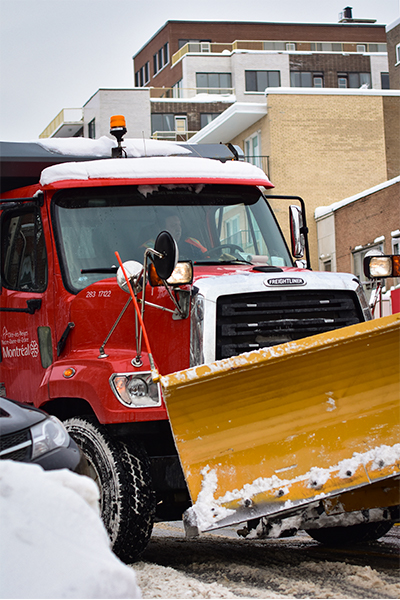 A Montreal snow plow on its route to remove snow from the streets in the Côte-des-Neiges-Notre-Dame-de-Grâce borough. Photo by Laurence Brisson Dubreuil.

In 2001, road salt was declared a toxic substance in Canada after researchers found that a number of animals and plants died if exposed to enough road salt.

“Alongside the edges of roads where a lot of salt is used, the plants who can only handle a little bit of salt before they can no longer breed, they’re just not there anymore,” says Pattys Gillis, an aquatic toxicologist and research scientist at Environment Canada.

Gillis says that road salt harms organisms and plants who are exposed to large quantities of salt in the short term. However, a steady increase of salt over time can lead to shifts in entire ecosystems and less biodiversity.

Last winter, Montreal accounted for almost 4.5 per cent of the total road salt used in Canada. Infographic by Maya Lach-Aidelbaum.

In 2004, Environment Canada published a guideline for snow removal companies on proper road salt management. It was an attempt to diminish the amount of road salt used. However, the Code does not require road organizations to conduct environmental monitoring or to adopt any of the recommended measures.

Since 2013, 13 municipalities in Quebec have volunteered to adopt Quebec’s version of these guidelines. Montreal was not one of them.

“We were having a hard time managing the mixed weather that we were getting,” said Dexter Church, president of DLC. “Typically with a freeze-thaw climate you get a layer of ice underneath that fluffy snow. It creates a danger for a lot of pedestrians.”

Church noticed that applying brine on icy roads is actually common practice in Ontario and he decided to try it out. Indeed, Toronto has been spraying brine on its streets since 2001. So far, the switch has been a success. 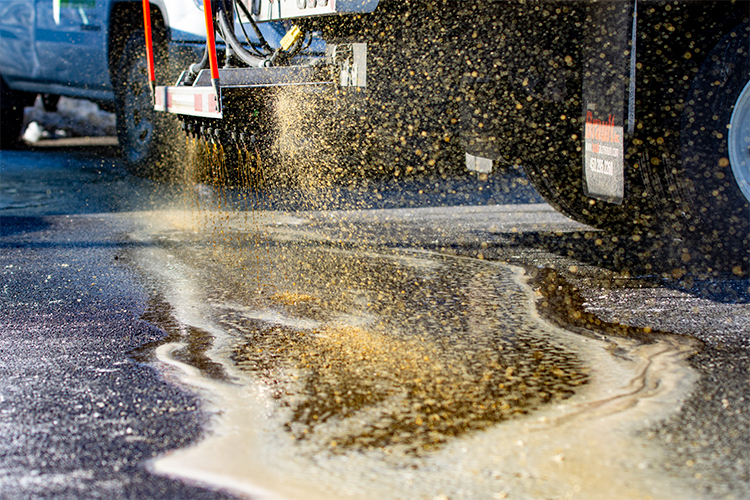 A truck retrofitted with spray nozzles spreads brine on the ground. Photo by Laurence Brisson Dubreuil.

“With the liquid application it reacts instantly,” said Church. “You can apply [brine] and minutes or seconds later you can see the surface is no longer slippery and no longer a hazard.”

One reason this method isn’t more widely used is that there’s a significant cost up front for the brine-making equipment .

DLC spent just over $100,000 on setting up its brine making equipment. That included buying a brine truck and storage units, and setting up specialized plumbing for the brine.

To implement brine deicing techniques city-wide, all snow removal contractors would have to retrofit their trucks and equipment with new attachments capable of spreading the liquid. 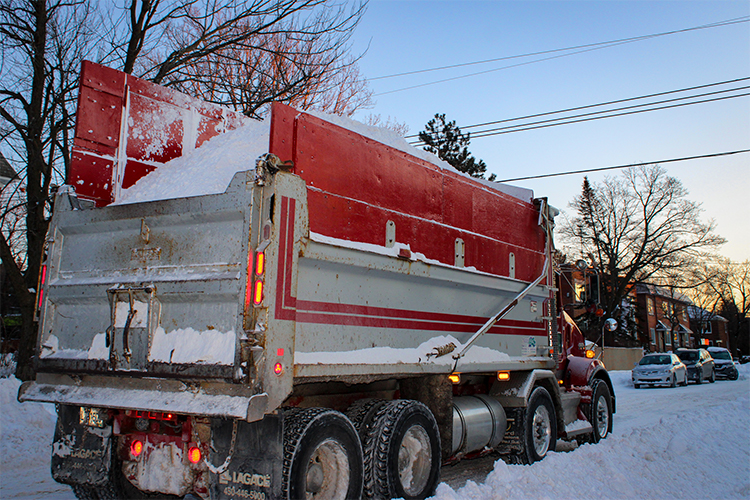 While it does require a large initial investment, Mervis says this new deicing method will save his company a lot of money in the long run.

“It’s the upfront cost that’s expensive, but we’ll reduce our rock salt consumption by half to service the same square footage that we service right now,” he says.

The City of Montreal has budgeted $177.8 million for their snow removal operations this year. They did not specify how much of the budget is for road salt, but the province spent $43 million for road salt this winter. With the high cost of road salt, using brine could amount to huge savings. 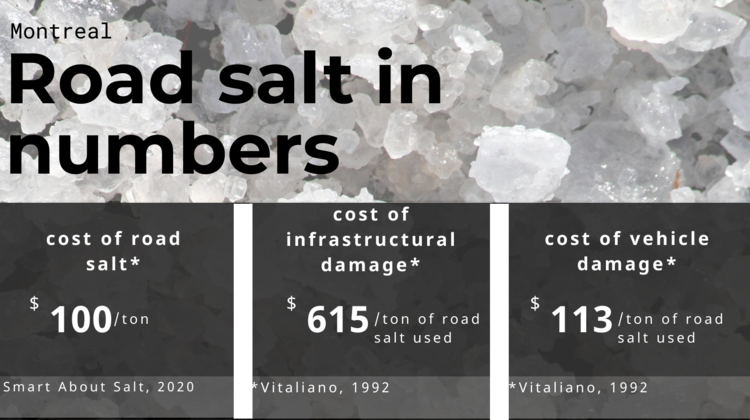 The use of road salt in Montreal leads to several costs. Infographic by Maya Lach-Aidelbaum.

Mervis says that using the brine will also help individual Montrealers save money.

“Rock salt is not only bad for the environment, it makes a mess of people’s assets, of their buildings, of their carpets,” he says. “The results are kind of incomparable. Brine or liquid application has immediate results, whereas with rock salt you’re highly dependent on vehicle traffic and the sun.”

Year after year, the amount of salt used by the City of Montreal is increasing, partially because of changing winter weather patterns. Montreal now uses on average 200,000 metric tons of road salt per year.

“Salty water is leaking down into the earth into our groundwater,” says Gillis. “We’re seeing that the concentration of salt in groundwater is steadily increasing over time, particularly in urban areas. We’re going to see some ecosystems potentially dominated by salt-resistant species and we’re losing biodiversity there.”