Simon Duchaine-Morneau is a student at Collège de Montréal. He says he and his classmates felt confused during his last weeks in secondary four before he went to his last year of high school.

“The end of secondary four was weird, our science teacher would give us so many things to do as homework but at the end it was either evaluated or non-evaluated which made the transition between online and at school really hard for some people,” Duchaine-Morneau says. 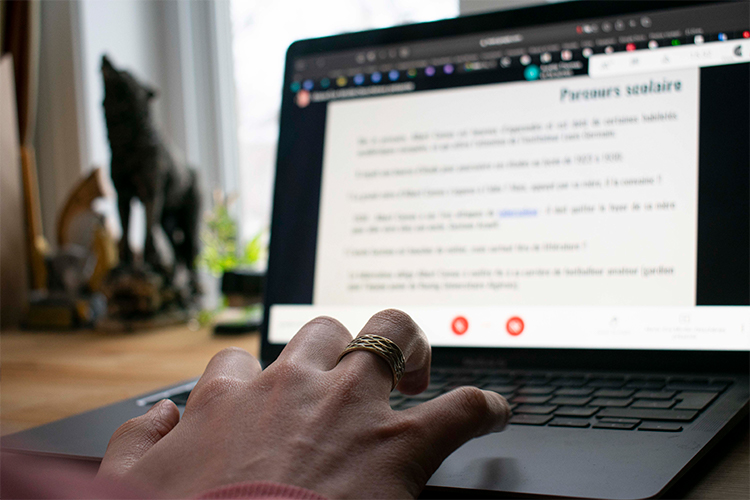 Simon Duchaine-Morneau’s hand on his mouse pad as he scrolls through a document. Photo by Bryanna Frankel.

He says that when the pandemic started, his classmates were happy about not having school, but they soon realized that things were not going to be the same for a while.

“I remember when we saw the announcement of us not having school for two weeks, we saw that they were closing wall climbing centres, all the movie theatres and we went to our cottage. It then only got worse, and by that time the week after the start of the lockdown I knew it would last until summer if not longer,” he says.

Lucien Chiasson is a nursing teacher for first year students at Dawson College. He explains that while they get around 100 to 130 students per year into the program, some have decided to pause their education because of the pandemic. 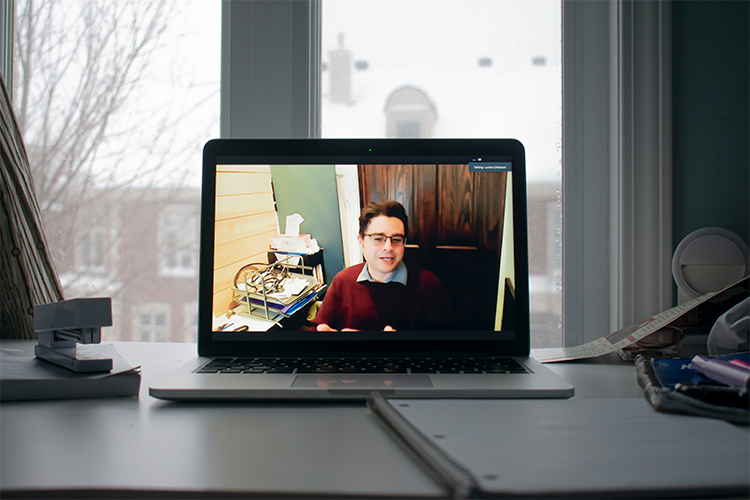 Lucien Chiasson in a zoom call for a class. Photo by Bryanna Frankel.

“So that number has not really changed, but during the semester we have had some students put their studies on hold with the hope of coming back when the situation is more normal,” he says.

Duchaine-Morneau believes that a lack of motivation has greatly affected his education.

“A couple of my grades for exams went down because I was not really listening and I was not motivated. A lot of the time I was not motivated because the new schedule would make me arrive later at home than usual, (due to the fact that they finish their school days later than before) so trying to do homework when it is already dark outside is not really motivating,” he says.

The new learning schedule has taken an emotional toll on him as well.

“It feels heavier online. You listen to someone speaking, there is no interaction. It is not like in class where sometimes if you get bored you would speak to your classmate and then you would laugh together and you would then start to listen again and it would motivate you. Now you are alone in your house, and you listen to your teacher but you get lost in the middle of it and it is hard to get back in,” Duchaine-Morneau says. 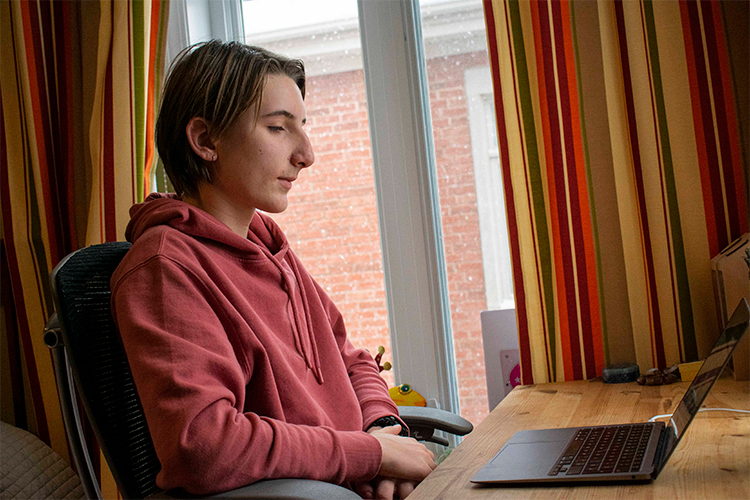 Simon Duchaine-Morneau looking at a video on his computer screen . Photo by Bryanna Frankel.

Psychologist Melissa Stern says these emotions are normal during the pandemic.

“I think there is a lot of difficulty, [for students], in seeing where this is going to end. So it is like ‘why even bother’. It is so different to what they are commonly used to as well,” she says. “In high school it is one day on one day off and so the rhythm that they are used to building in going to school from like nine to three is completely disrupted.”

Micheal Andojar, a sociologist and associate professor at the University of Calgary, says he believes that online learning is making things more difficult for adolescents whom some had already a rough go before the pandemic.

“Imagine that you have a heavy backpack that you are trying to lift and it is already filled with rocks and then suddenly now the thing is on fire and it is now lava rocks that you are carrying around,” says Andojar. 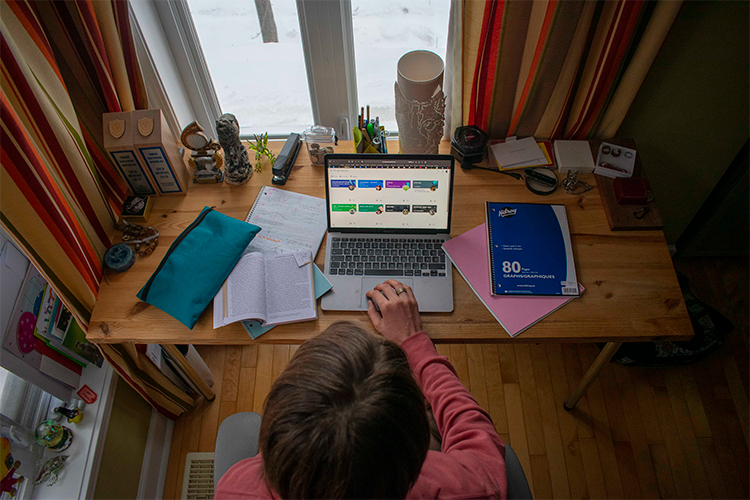 Simon’s notebooks and textbooks on the table as he watches his computer screen for his class work. Photo by Bryanna Frankel.

He explains that there is a digital divide that has been created due to online learning and that the notion of privacy has changed because of it.

“Needing to understand that this camera is on, the audio is on and so my parents are here talking, all of these things blend the public and private in ways that you never had to think about it before,” Andojar says. “And sometimes students learn very quickly about breaching certain social norms based on what is accepted or not.”

According to preliminary results from a research study conducted by the ÉCOBES department at the Cegep de Jonquiere, the distress levels of cegep students has gone up more than 20 per cent during the pandemic. Just under 38 percent of students surveyed said their grades have deteriorated because of long distance learning. 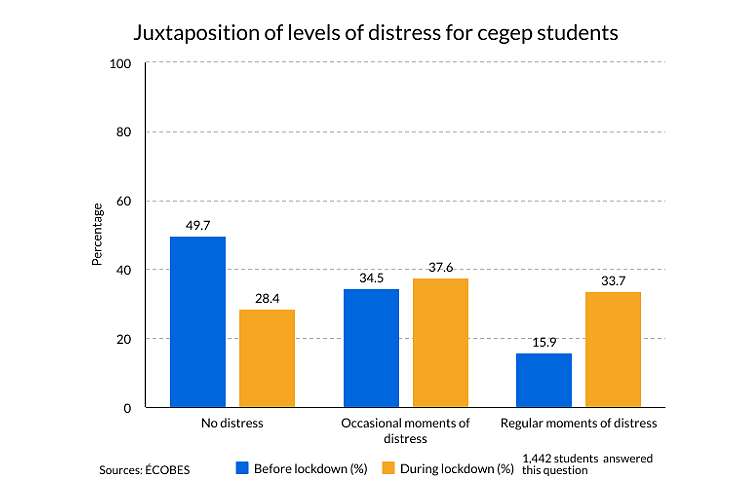 Luc Blanchette, a psychology teacher at Cégep de Trois-Rivières, is not surprised by the results.

“As a matter of fact, the thing that I am the most surprised about is the level of honesty that the students showed. What we are lacking is specialized resources to help those people the way those people need to be helped,” Blanchette says.

While the material is all online, some departments of study, such as film studies, need equipment and tools to be used to help students understand what they are meant to do in a real life scenario.

But not all is doom and gloom. Andojar explains that there are some opportunities that can be created from online learning that may actually be beneficial rather than being negative.

“The ability to have the virtual lessons at home does allow a little bit of flexibility in terms of social connections, time management and when the work is accessed and done. People were not aware of those benefits before,” he says.

What is next for students is one of uncertainty for Duchaine-Morneau as he does not know whether or not he will enter cegep physically or virtually when his semester starts. 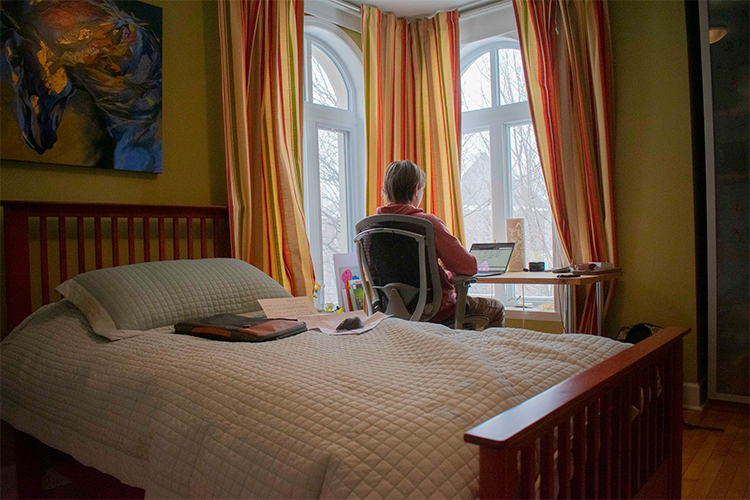 A look at Simon Duchaine-Morneau’s room which also works as his study spot for school. Photo by Bryanna Frankel.

Stern explains how the social interactions have taken a toll on all students.

“We want to try and stay socially intact as people, and so I think our own human nature and the fact that we are social beings makes this really difficult. It is not normal to us,” she says.

Duchaine-Morneau says he is dealing with the situation as best he can.