On February 26, 2021, a volunteer at the charity thrift store Thriftit in Pierrefonds posted a video to Tiktok inviting customers to visit their shop. Five days later, that video went viral, collecting nearly 150,000 views in a month. It led to a sudden surge of customers.

“When we opened that next morning, we had lineups outside. I am not kidding when I tell you that the week before, I watched eight hours of Netflix without one single person walking into the store. The difference was really day and night,” says Kayla Reid, manager of Thriftit. The video had caused such a frenzy that some customers waited up to two hours to get into the store on one of winter’s coldest days. 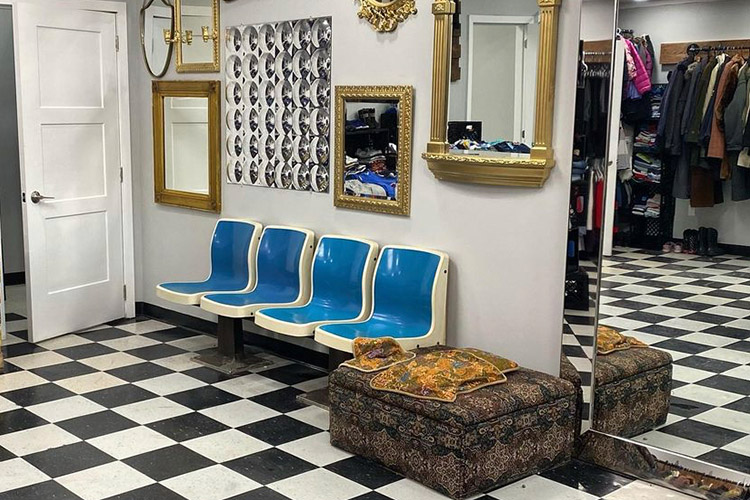 Thriftit is a non-profit thrift store located in Pierrefonds. Kayla Reid, store manager, says the team worked to give Thriftit a vintage feel. Photo courtesy and by Kayla Reid.

Their overnight success story came right when they needed it most, according to Reid. Thriftit is part of On Rock Community Services, a food bank that helps feed 300 families in the Pierrefonds-Roxoboro area. The non-profit thrift store was meant to generate money for the food bank, given they could no longer rely on fundraisers to raise funds due to the current COVID-19 restrictions.

According to Reid, business was good when they first opened in November 2020 but that was sadly short-lived because of health restrictions.

“When we reopened in February, it was a dead zone, and I really started to panic,” she says.

Reid had always assumed Tiktok was for children and teens. When it came to promoting her business, she stuck to what she knew; Facebook and Instagram.

“I had been told by several people that I had to get onto Tiktok, but I just thought those two platforms would be enough,” says Reid. In the end, it was a few high school volunteers that created content for Thriftit’s Tiktok account, a move that visibly paid off given the sudden surge of customers and did not require any marketing background. 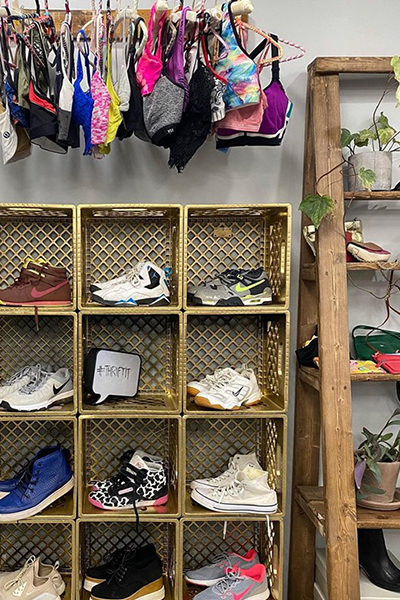 Thrifty sells second-hand garments exclusively. Customers can find anything from accessories to clothes in stores. Photo via Kayla Reid.

However, Thriftit is one of the lucky few who made it viral. While creating popular content may appear to be within anyone’s reach, the reality is that generating success often requires a lot of work, and a little luck.

Mia Kalille, owns the thrift store Kapara Vintage on St-Laurent Blvd. She is not convinced Tiktok is a viable marketing tool for her business.

“It’s not really clear how to make your content go viral. There is this misconception that promoting your business on the app is easy, but it requires you to set time aside in your day exclusively for that purpose,” says Kalille.

Kapara Vintage has garnered over 24,000 followers on Instagram since 2015 but has struggled to grow the same following on Tiktok. For months, Kalille would set aside at least 30 minutes every day to create videos for the platform but has now stopped using the app altogether. She felt that it was not helping her business in any significant way for the time and effort she was investing.

“Maybe if I had continued to be consistent, I would have eventually seen results,” she says. 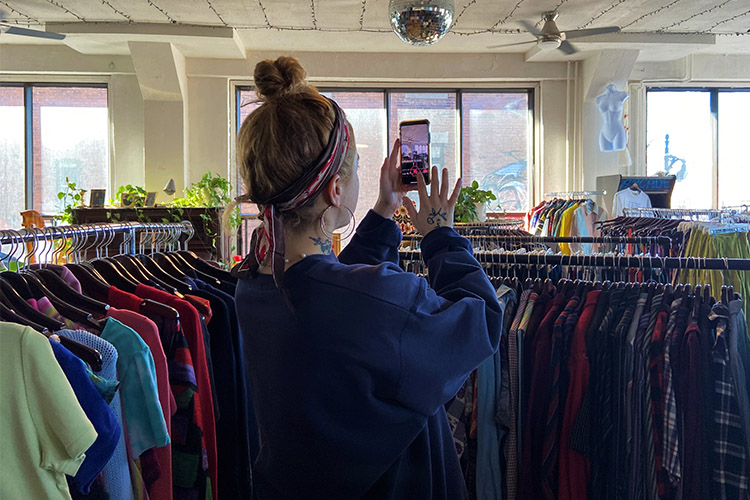 Mia Kalille stands in the middle of her boutique filming content for her social media accounts in her boutique, Kapara Vintage, located at 4234 Blvd. St-Laurent in Montreal. Photo by Britanny Clarke.

According to Jérémy Grandmont from the marketing agency J Influence, consistency is one of the keys to success on Tiktok. Grandmont specializes in influencer marketing; his job mainly consists of helping influencers land brand deals, requiring him to be at the forefront of social media trends, including Tiktok.

Influencer Marketing on Tiktok: Tiktok hasn’t only helped Montreal businesses gain popularity. The platform has created a surge of local influencers like Erica Sun, who has risen to fame through Tiktok. Video by Amanda Bernard.

Over the past year, he has accompanied content creators and entrepreneurs as they attempted to market themselves on the platform. He analyzed each account and attributed certain factors to their growth. Beyond consistency, variables like finding a niche, showcasing one’s personality, calls to action, and content that would ensue an emotional reaction all have a part to play.

“In general, from what I’ve observed, the more successful videos are the short ones, those who hook viewers from the get-go. Something needs to happen quickly, and the video needs to wrap up in a matter of seconds.” Grandmont says. “Nowadays, consumers want everything to happen instantly. Marketing has become all about immediacy.”

The platform’s strength, according to him, is the proximity to consumers businesses can benefit from, something that makes Tiktok all the more appealing.

“Imagine the current social media landscape as being like a funnel where Facebook is sort of broad and very much geared towards publicity. It’s not really a platform that enables you to get noticed. Then you have Instagram, which gets you closer to your target audience. It’s still very much in its prime, but now you also have Tiktok, which is closer than ever to consumers. Because of its functionalities, it allows users to interact with brands by creating their own content in direct response to their videos,” explains Grandmont.

According to data collected by Business of Apps, roughly 35% of marketers in the US, UK and Germany plan on using Tiktok in 2021.

Although Tiktok has great marketing potential, Grandmont says it isn’t quite there to enable businesses to generate sales directly through the app as Instagram currently does. “Tiktok has recently partnered with Shopify, so it is something that will most likely be happening soon, and when it does, the platform will have the potential to become a much more dynamic consumer experience than Instagram offers at the moment,” he says 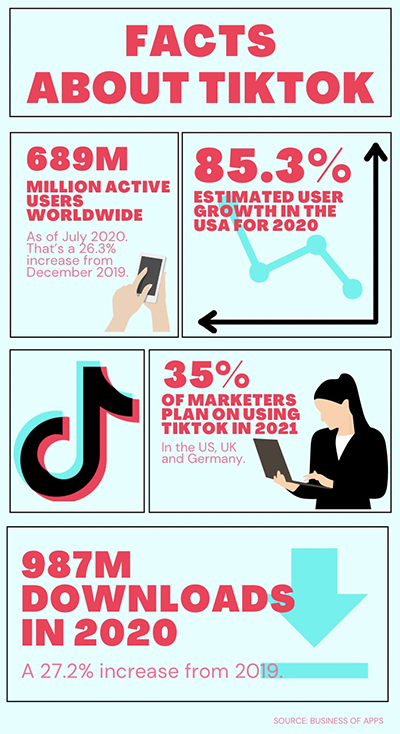 Tiktok is a platform in expansion. Here are a few facts about the platform. Media by Britanny Clarke.

Brent Pearce teaches marketing at Concordia University. He says the “new” marketing will most likely die out very quickly but also notes that marketing is not what it used to be. “Traditional marketing is dead,” he says. According to him, marketing is all about evolution and revolution to always be ahead of the curve.

“There is not a blueprint right now,” he says. “It’s all about doing things that haven’t been done.”

One thing the app appears to be getting right is the way it uses the information it has about its users to feed them content that is relevant to their age, gender, language, race and above all, specific to their geographical location. This works well for local businesses and is something Kayla Reid from Thriftit only genuinely understood once her video went viral.

“At first, I assumed the views were meaningless because I thought they were from the States but then I noticed everyone commenting had francophone names and were from Montreal. That’s when I understood we were going viral in the right place,” she says.

While TikTok is all the rage for the moment, it begs to question if it is a sustainable way to practice marketing in the long hall or simply a platform that enables businesses to get a taste of overnight success. Reid says that even if the platform would only give businesses five seconds of fame, the visibility is still worth it.

“Obviously, we have fewer customers now than when the video went viral, but it still put us on the map and gave us 2,000 followers we didn’t have beforehand. It allowed us to make money that went directly to the food bank, which we are grateful for,” she says. 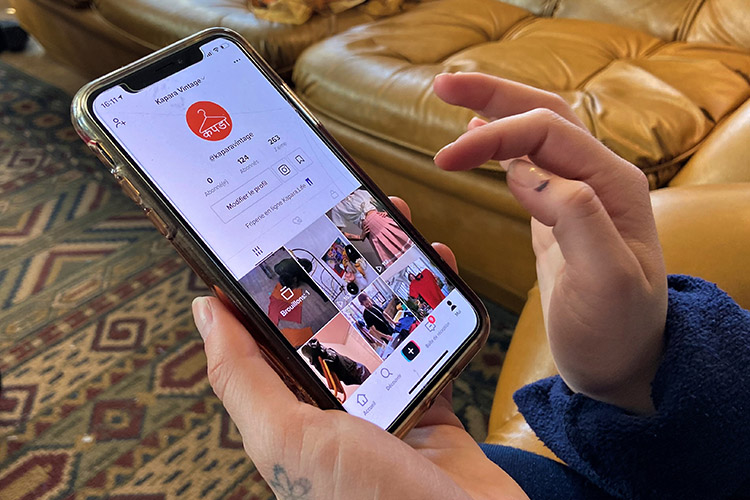 Mia Kalille, owner of Kapara Vintage, scrolls through the stores’ Tiktok account. She has not been active on the platform for a few months now. Photo by Britanny Clarke.