A mind needs books as a sword needs a whetstone, if it is to keep its edge.”
– George R. R. Martin, A Game of Thrones

With the advent of ebooks and online reading, many declared that print was dead. But that doesn’t appear to be the case. According to a recent study, the number of bookstores in Quebec has actually been growing by almost two per cent annually since 2015. 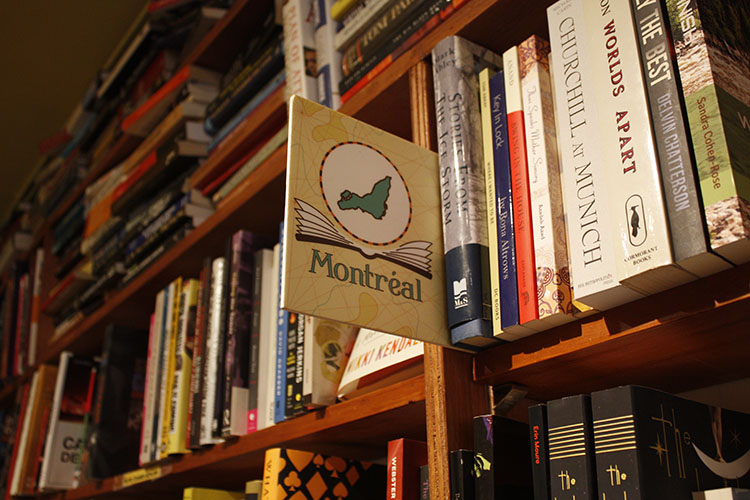 Argo Bookshop offers a carefully curated section for books on Montreal. It is the city’s oldest English-language independent bookstore, open since 1966. Photo by Stephanie Ricci.

Brendan King-Edwards manages The Word bookstore which has been selling books on Milton St. in the McGill ghetto for 45 years.

“I think that at the end of the day, my issue is often with media oversimplification of a lot of [the statistics],” King-Edwards says. “It’s like Amazon versus independent bookstores, versus this versus that.”

He says those conflicts don’t really apply to The Word bookstore.

Established in 1975, the place exudes history and warmth. Prior to starting the bookstore, King-Edwards’ parents sold used books and hosted poetry readings in an apartment next door to a laundromat. When the latter space became up for sale, the couple took it as an opportunity to expand, and thus, The Word Bookstore was born.

Another fact that makes the space special is that in the 1800s, it was a stable in the middle of a field.

The bookstore’s rich history is evident in its feel, from the wooden walls and shelves, to the step-ladder that leads to a second floor.

The Word Bookstore has books that cover everything from literature to spiritual writings, and a reading nook for those who wish to immerse themselves in a story, complete with a fireplace in the center of the room.

“I think that whether you’re visiting from out of town, or whether you live in Montreal, it’s just a unique space,” Brendan says of The Word Bookstore’s “idiosyncratic, unique vibe.”

“On the one hand, you have people who are literally book obsessed, and will go wherever they can to get cheap books, because that’s just what they do,” he says. “They want to buy and buy and buy books. And then, you know, beyond that, there’s people who may be tourists and [their priority is not accumulating books, it’s the] space. It’s very unique. It’s an old building, it hasn’t changed since 1975. It’s a very quiet space. So you’re kind of in a consumer space that’s not full of the usual stuff, like music or a lot of people.” 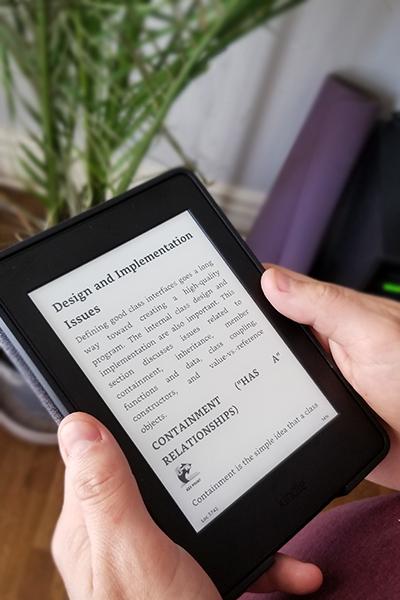 For some, e-books have become a more convenient way to read. Photo by Cristina Sanza.

Throughout the years, bookstores in Montreal have undergone quite a few changes, and it hasn’t always been easy to stay relevant in the marketing game, according to Brendan.

He notes that a major event was the closing of the Chapters store in downtown Montreal in 2014.

“Amazon went to war with big box stores, and the only thing the stores could do was try to change their game plan,” he says. “Because if Amazon is selling the Harry Potter books for 25 per cent less than Indigo, Indigo just lost millions and millions of dollars. I think there’s nothing they can do about it. We are in this whether we like it or not—this very cutthroat system where people have the ability to just undercut and undersell and sell things at cost until they gather up all the marketplace.”

One thing local bookstores do to stand out in the community is host book events supporting local authors, and marketing their work.

When it comes to the change in book sales, there are a number of factors at play. Independent stores have more personal service and specializations, while chains have a larger selection. Also, some consumers opt for both physical and electronic copies of a book.

Sky Shi, for example, is an avid reader and prefers ebooks.

“As you grow older, reading isn’t just about enjoying the story anymore,” Shi says. “What you read makes you think, and when what I read is interesting, I tend to highlight the passages—which I find is easier to do on an e-reader, or on my laptop. If I do that with a physical copy, I feel bad.”

However, he does enjoy visiting bookstores and has a favourite.

“I first visited Indigo five or six years ago and I fell in love with it,” he says. “I fell in love with the design, the location, the setting, and just the overall atmosphere. Indigo is definitely my go-to, and is very convenient for me.” 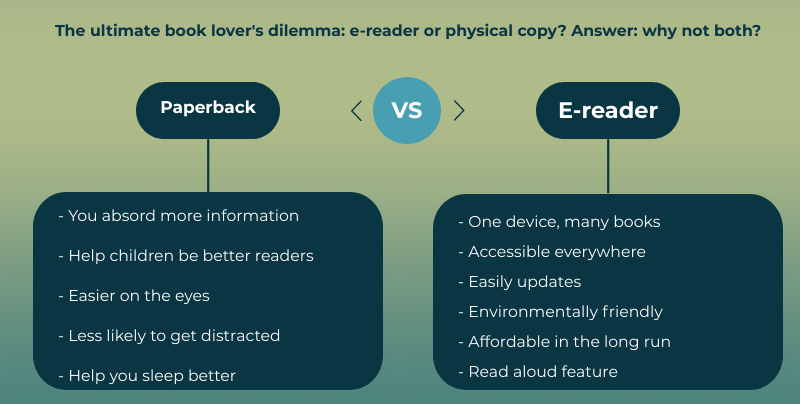 Both e-books and print books have their pros and cons. Media by Youmna El Halabi, with information from Mental Floss and Kitaboo.

Clare Chodos-Irvine is an independent publisher and writer, and social media coordinator for the literary magazine Yolk. She has a different take on things.

“I think I will always prefer reading a physical copy of a book,” Chodos-Irvine says. “I guess I always liked the feel of an actual book in my hands, and how easy it is to just write on it directly.”

Chodos-Irvine also prefers local independent bookshops, as she believes there is always something special and unique in them.

“[Local bookstores] are always filled with used, cheaper books,” she says, “and they may not always have what I’m looking for, but they always have one thing that I never thought I wanted, but end up actually loving. It’s nice to have a space that feels like a community.”